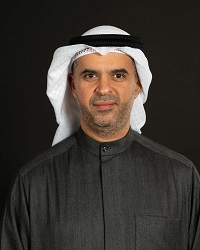 Abdulla Najeeb Almulla is the Chief Administration Officer and Board Member of Al Mulla Group, a leading diversified privately held business group based in the State of Kuwait.

Since joining the Group in 1997, Abdulla has held variety of leadership roles within the Group including; Group Director of Human Resources, Deputy Chairman of Al Mulla International Financing and Investment Company from 2006 till 2012, the largest non-banking Islamic financing company in Kuwait, and he is the current Chairman of Al Mulla Exchange Co. In his current capacity, Abdulla is responsible for overseeing the entire Group’s administrative functions ensuring compliance and adherence to the Group’s SOPs and the high corporate governance standards, which sets the Group apart from the competition and ensure its leadership position among the top privately owned businesses in the region.

Abdulla graduated from Pacific Lutheran University in the United States of America in 1996 with a Bachelor’s degree in Finance.

Abdulla has held past and present positions as Board Member in several other organizations including: