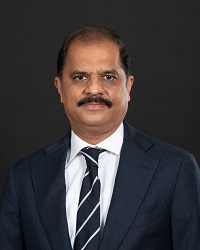 Rohit Bhasin is the Chief Financial Officer of Al Mulla Group, a leading diversified privately held business group based in the State of Kuwait.

Rohit joined Al Mulla Group in April 2016 as General Manager – Finance. Over the years he took on various leadership roles and responsibilities including Deputy Chief Financial Officer, a role that he kept until March 2022. In April 2022 Rohit was appointed as Chief Financial Officer of the Group. In this role, he leads the Finance function, including Corporate Finance, Group Treasury, Group Financial Accounts, Merger & Acquisition Initiatives, Audit, Risk Management and Governance.

Rohit has over 25 years of global leadership experience across multiple industries including Financial Services, Manufacturing, Trading, Audit and Consulting. Prior to joining Al Mulla Group, he was Vice President in GE Capital and led the Enterprise and Operational Risk Management function and held several senior leadership roles spread across Finance, Operations areas. Earlier in his career, he had also served in Ernst & Young, India and the UAE.

Rohit sits on the boards of the Al Mulla Group’s companies, including: