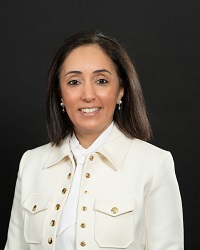 Danah Anwar Al Mulla is the Chief Strategy Officer and Board Member of Al Mulla Group, a leading diversified privately held business group based in the State of Kuwait.

Danah joined Al Mulla Group in 2000, and after 10 years of experience with the Group as Director of Planning, she assumed her current position in March 2010. As part of Al Mulla Group's Executive Leadership Team, Danah's responsibility includes setting up and leading progressive strategies of the Group and its subsidiaries. In addition, Danah holds several key leadership roles within the Group’s businesses as Chairperson of Al Mulla Finance, Deputy Chairperson of Royale Hayat Hospital, Head of the Operations Committee at Kuwait College of Science and Technology, and Deputy Chairperson of Al Mulla Rental and Leasing.

Danah holds an MSc in Economics and an MA (Hons) in Oriental Studies from the University of Oxford.

Danah sits on the boards of numerous other companies and entities, including: